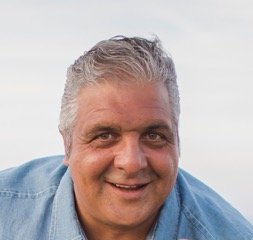 Born in Jersey City, to Thomas G. and Emily Aljian on July 29, Mark was raised

in Watchung and graduated from Watchung Hills Regional High School.

After attending and playing football for Delaware Valley University in Doylestown, Pennsylvania, Mark returned to New Jersey and has been a resident of South Plainfield since 1997.

Mark always prioritized protecting others.This was reflected by his enjoyment in working security for Orphan Annie’s in Stirling, The Gold Post in Scotch Plains/Fanwood and The Club House/Shout in Plainfield. Mark was also a manager and owner of the Park Gentry in Plainfield.

He found his true professional passion in landscape development and founded the Phoenix Landscape Group of South Plainfield.

Mark additionally had a passion for serving his community. Starting in high school, he

volunteered at the Gillette Elementary School by teaching a childhood development class. While his daughters attended Sacred Heart School, he was an Athletic Director and volunteer for multiple fundraisers. Through his involvement, he formed a tight bond with four other fathers. It is their friendship, along with their wives and children that was very precious to Mark. Over the past thirteen years, they have spent many football Sundays and holidays together.

Mark found peace and tranquility vacationing with family and friends as well as fishing in the Outer Banks of North Carolina.

His greatest joy was spending time with his family and friends on the beach.

Another one of Mark’s passions was watching and coaching football. He was an avid Tennessee Titans fan. Earlier this year, he traveled to Nashville with his “Mudmen” to see a home game.

Additionally, Mark was a defensive coach for the Pop Warner team of Watchung Hills for over a decade.

Mark is preceded in death by his mother, Emily Aljian; and father-in-law, Kenneth Odom.

Visitation will be held on Monday, November 25, 2019 from 3-8pm at the McCriskin-Gustafson Home for Funerals at 2425 Plainfield Avenue, South Plainfield, NJ 07080. Relatives and friends will be gathering in the funeral home for funeral services on Tuesday, November 26, 2019 at 9:15 am prior to a 10 am funeral mass at Sacred Heart RC Church, South Plainfield.