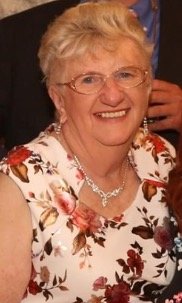 Bernadette Bavoso (nee Ryan), 83, of Piscataway, NJ passed away peacefully Friday, March 5, 2021, at home. Bernadette was a kind and generous person who always had a smile on her face. She was the ultimate loving daughter, mother, mother-in-law, sister, aunt, grandmother, great-grandmother and friend. Everyone she met became family. Grandma/Aunt Bernie’s passing has left a void in the hearts of all who knew her.

She was born to the late Helen and George Ryan on April 6, 1937, in Brooklyn, NY, where she resided until moving her family to Plainfield, NJ in 1969 and eventually making her home in Piscataway, in 1986. After retiring from Lockheed, she took on the position of Crossing Guard where she could be seen offering a “high-five” or a Tootsie Pop to the students of Grandview School.  She was a member of the Columbiettes, and the Red Hat Ladies. As a member of Our Lady of Fatima Parish, she volunteered for Eucharistic Adoration and in the Fishes and Loaves Café.

None of this compared to the time she spent with family. Family was most important to Bernadette. She would never miss an occasion, including the annual camping trip with her daughters, nieces and nephews and their families.  And no wedding was complete without her dancing the “twist” with Timmy. The true sunshine of her life was the time she spent with her grandchildren. She has a special relationship with each of them and loved them the whole world and two pennies.

During this ongoing pandemic, according to Executive Orders and the CDC guidelines, we kindly ask that face masks must be worn while visiting, to be mindful of physical distancing to the best of your ability, and are asking visitors to minimize time spent indoors to allow everyone a chance to pay their respects. We thank you for your understanding and for taking these precautions during this difficult time.