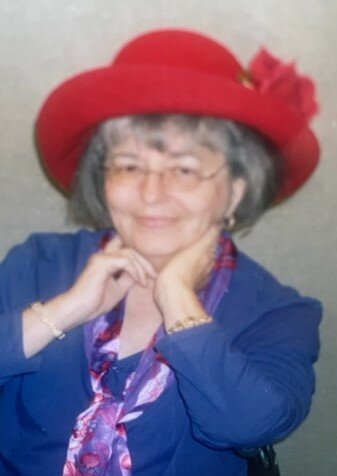 Grace was born on December 13, 1941 in Bayonne, NJ to the late James and Jane (Peters) Rooney. She lived in Bayonne with her parents and three older sisters. In 1960, Grace met her husband Roger, a Navy man from Indiana. The two were married in 1967 and moved to Middlesex, NJ where they welcomed two children: Melanie and Scott.

Grace was proud of her work for AT&T where she spent a combined 28 years working her way up from a messenger to a correspondent of the Chairman’s Group. In addition, Grace served 22 years in her community through the Middlesex Borough Board of Adjustment. She continued to support her community while residing at Raritan Health and Extended Care from 2007 to 2017 by initiating a chapter of the Red Hat Society and assisting newcomers in their transition to a new home as a resident volunteer. In 2017, Grace moved to Bridgeway Care Center where she spent her last few years closer to her family who visited often.

Grace is predeceased by her husband, Roger (2008), and her three sisters, Lorraine Kulik (2009), Jane Wafer (2018), and Joan Campbell (2018). She is survived by her loving daughter, Melanie Rosengarden and her husband Andy of Flemington, their two children Allison and Daniel, as well as her son, Scott Shepherd of Delaware, and daughter-in-law, Kathleen Hatton of Middlesex, and their three children, Corey, Ryan, and Sean. Grace also has eleven nieces and nephews, along with great-nieces and nephews.

In Lieu of flowers, the family asks for donations to the National Multiple Sclerosis Society, as Grace has struggled with the disease for most of her adult life. https://www.nationalmssociety.org/Donate