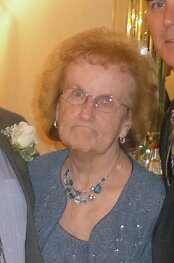 Please share a memory of Barbara to include in a keepsake book for family and friends.
View Tribute Book

Born and raised in Morris Township Barbara resided in East Orange for a short time before settling to South Plainfield in 1963. She worked for Scott Specialty Gases in South Plainfield for 30 years until her retirement.

A devoted wife and mother, Barbara took pride in caring for her children and husband.  She was the president of the Woman’s Auxiliary of Junior Baseball and volunteered with the South Plainfield Observer.   She enjoyed shopping, having her hair done and taking trips with her late husband, Frank.

Predeceased by her beloved husband who died in 2017, Franklin Smith; surviving are her two sons, Frank Smith and Robert Smith as well as two grandchildren, Dayna and Ryan.

Funeral Services will be held on Tuesday, April 5, 2022 at 9AM in the McCriskin – Gustafson Home For Funerals 2425 Plainfield Ave. South Plainfield, NJ followed by a 10AM funeral mass at Sacred Heart RC Church, South Plainfield.

Interment will follow at Gate of Heaven Cemetery, East Hanover.