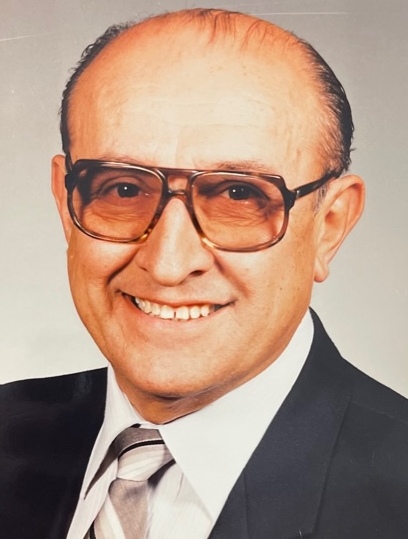 Please share a memory of Stanley to include in a keepsake book for family and friends.
View Tribute Book

Bayville, NJ – Stanley Baldyga, 93, passed away on Sunday, September 11, 2022 at Morristown Medical Center.  Born in Perth Amboy to the late Zygmont and Victoria (Lencki) Baldyga, Stanley attended St. Stephen’s Grammar School and graduated from St. Mary’s High School.  In 1953, he moved to Woodbridge for a short time prior to settling to Piscataway in 1959.  In 1986 Stanley moved to Hillsborough and in 2006, he and his wife Dolores settled in Bayville to enjoy retirement.

At the age of seventeen, Stanley enlisted in the United States Navy.  He served on board the Flagships; USS Newport News, USS Salem and the USS Des Moines.  He proudly served during World War II, and the Korean War.  After his honorable discharge from the Navy, he continued serving in the reserves for twenty-six years as a Sgt. First Class in the United States Army Reserves.  Stanley was proud of his military career and earned numerous medals, including the Meritorious Service Medal and the Army Commendation Medal.

He also worked as an inspector in the office of the Inspector General for Fort Monmouth.  He was the proud owner of Dairy Queen in Perth Amboy for eleven years and known as, “Stan the Ice Cream Man.”  He retired from the Hunterdon County Sheriff’s Office where he worked in Security.

After his government retirement, he became active in many organizations.  Stanley was a former treasurer and life member of The National Active and Retired Federal Employees, Chapter 1182, Southern Ocean County; the Retired Enlisted Association; National Association of Uniform Services and the US Navy Cruiser Sailor’s Association.  He also belonged to the Knights of Columbus, Council #6522 of Forked River where he was a Third Degree Knight.  Stanley enjoyed his time spent as a member of the Somerville American Legion Post #12 and the Manville VFW Post #2290.

In his spare time, Stanley enjoyed spending time at family gatherings and being with his granddaughters as well as rooting for Rutgers, the NY Mets and the NY Jets.

Predeceased by his wife Dolores in 2011, Stanley leaves behind his loving son Thomas and his wife Christine of Wayne and by triplet granddaughters; Amanda, Bethann and Catherine also of Wayne.  He will be missed by his niece Cindy Piano and her family, as well as three nephews; Mike, Mark and Brian, two sisters-in-law Irene Wanzie of Piscataway and Tess Baldyga of Menlo Park and his cousin Edward Lencki of Piscataway.

In lieu of flowers, donations in Stanley’s name sent to St. Joseph Indian School (www.stjo.org) would be appreciated.

Look inside to read what others have shared
Family and friends are coming together online to create a special keepsake. Every memory left on the online obituary will be automatically included in this book.
View Tribute Book
Share Your Memory of
Stanley
Upload Your Memory View All Memories
Be the first to upload a memory!
Share A Memory
Send Flowers
Plant a Tree
Admin Login | Website powered by FuneralTech & TA | Privacy Policy | Terms of Use