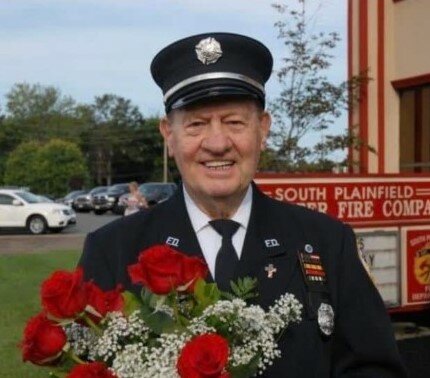 Robert G. Harding Jr., 91, passed away on Tuesday, December 13, 2022 at the Bayshore Medical Center in Homdel.

Born in Plainfield, Bob grew up in Dunellen, graduating from Dunellen High School in 1950, attended William and Mary University, and served in the U. S. Army from 1952-1954 prior to his honorable discharge. Bob had been a resident of South Plainfield since 1959.

Predeceased by his parents Robert G. Harding, Sr,  Mary Jacot Harding, and his brother Arthur; he is survived by his dear wife of 66 years, Dorothy Scarbaci Harding; children, Robert G. Harding III, Diane Ranger and her husband Ronald, and Julie Flasser and her husband James, all of South Plainfield; brother, Harold J. Harding and his wife Doris of Florida, and sister-in-law, Rosmary Harding of Piscataway; five grandchildren, Jessica Johnston and husband Michael, Danielle Hughes and husband Brian, Deanna, James, and Jennifer; five great-grandchildren, Tristan Hughes, Evelina and Callia Johnston, Colin and Faye Hughes, whom he loved, cherished and were his world.

Also surviving are many nieces, nephews, extended relatives and friends, along with his brothers and sisters of the South Plainfield Vol. Fire Dept. who were also a special part of his life.

Visitation will be held on Monday, December 19, 2022 in the McCriskin – Gustafson Home for Funerals 2425 Plainfield Ave. South Plainfield, NJ 07080 beginning at 4pm with a Fireman’s Funeral Service starting at 7:15pm followed by the rendering of Military Honors at 7:45pm.

In Lieu of flowers the family kindly requests donations be made to further benefit the South Plainfield Volunteer Fire Department https://www.southplainfieldfire.com/ or to the Alzheimer’s Association https://www.alz.org/