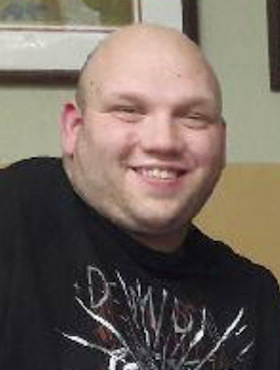 Please share a memory of Daniel to include in a keepsake book for family and friends.
View Tribute Book

South Plainfield, NJ – Daniel David Wallis, 40, passed away suddenly while at AristaCare at Norwood in Plainfield while there for rehabilitation.  Born in Perth Amboy to Dawn Marie (Mazzella) and the late David M. Wallis, Danny has been a lifelong resident of South Plainfield.

In his younger years, Danny worked several jobs; in the restaurant field, substitute teacher for the South Plainfield Borough Schools, Camp Counselor in Rahway for underprivileged children and also Pepsi, Co. in Piscataway.

Growing up Catholic, Danny received all his sacraments from Sacred Heart Church.  He attended South Plainfield High School and Raritan Academy in Piscataway, where he received the Student of the year award.

His biggest joy in life was sports, especially a special devotion to the San Francisco 49ers, Atlanta Braves or the Mavericks.  He could always be found cheering on any sporting event and in high school, he played on the bowling team.

His smile was the window to his love of life.  He will be missed beyond words and his death has left a void in the hearts of all who knew him, especially his mother Dawn.

Predeceased by his father Dave and both; maternal and fraternal grandparents, Danny leaves behind his loving mother Dawn Wallis and his aunts and uncles; Nancy and Sid Higley and Ann and Frank Mazzella, both of New Port Richie, FL, his great-aunt Arlene Erich of PA as well as several cousins and close friends, especially Diane Pender.

Visitation will begin 2:00pm at McCriskin-Gustafson Home for Funerals, 2425 Plainfield Avenue, South Plainfield, NJ 07080 on Friday, January 13, 2023.  A concluding prayer service will be held at 5:30pm and burial will take place privately at Holy Redeemer Cemetery with Danny’s father, Dave.

Look inside to read what others have shared
Family and friends are coming together online to create a special keepsake. Every memory left on the online obituary will be automatically included in this book.
View Tribute Book
Share Your Memory of
Daniel
Upload Your Memory View All Memories
Be the first to upload a memory!
Share A Memory
Send Flowers
Plant a Tree
Admin Login | Website powered by FuneralTech & TA | Privacy Policy | Terms of Use